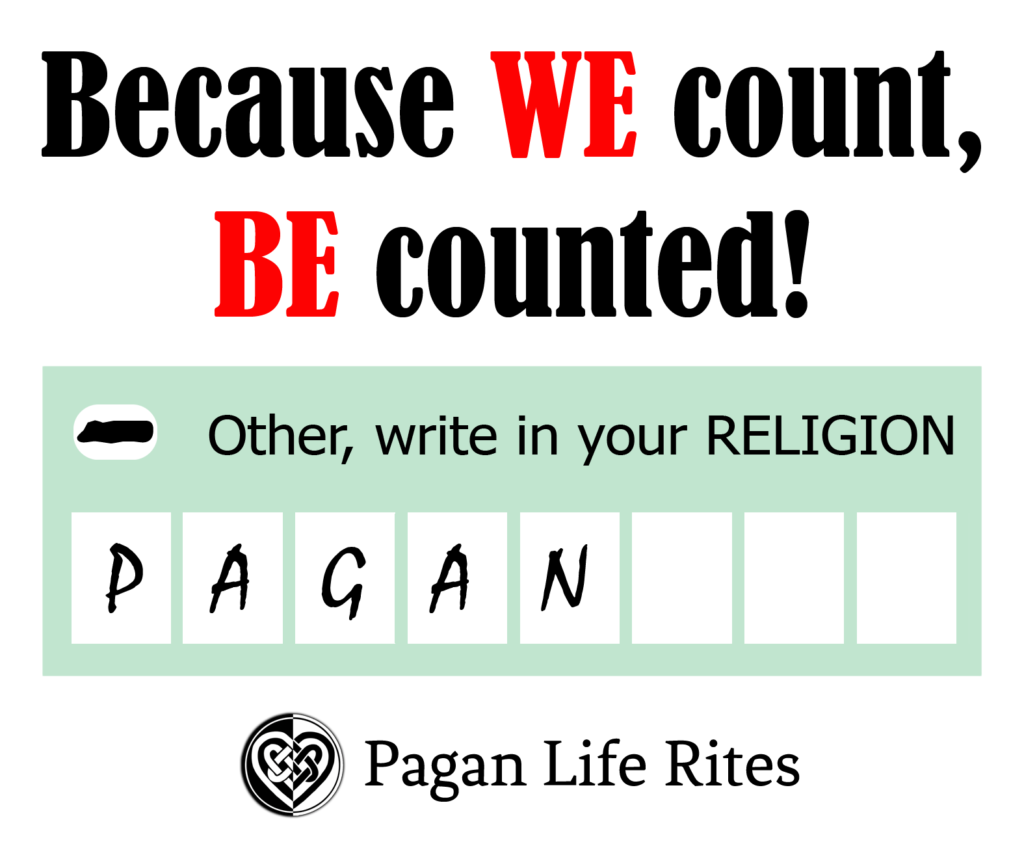 We are coming up to Census time again in the Republic of Ireland, which will be held on the 3rd of April, 2022.

Therefore, as in the 2016 Census, we at Pagan Life Rites would like to encourage you to enter Pagan in the “Other” field under Question 12, asking, “What is your religion”.

This is why we are asking you to do this.

By entering Pagan, you are giving yourself, and others like you, a voice in this country. We have often been hidden away and ignored, as if our spiritual beliefs did not matter. So, when it comes to our health, or our education, or our chosen careers, we often find ourselves side-lined, discriminated against, ridiculed or bullied – or simply non existent – when we ask that our spiritual needs be met.

Things are changing, but that change is slow, and the stronger we are, the more they will change.

We know that the paths and traditions in earth based spirituality, magic and other similar practices are manifold, and there are many branches to the Pagan tree. If we were to simply enter the tradition we practice, for example, Witchcraft, Wicca, Asatru, Druidry, Shamanism, etc., just to mention some of the more well-known traditions, these may well be categorised individually and not included under Paganism, thus, potentially registering smaller numbers of “Pagans” on the 2022 census.

Others might be inclined to follow the practice that has been carried out in other countries, the “Pagan Dash”, in other words writing down Pagan, then hyphenating their own practice onto it, for example Pagan-Druid. This too, can result in our numbers being shown to diminish, as they may well be entered into a different category.

Some folk may not have a title for their practice, or they may be still seeking the right path for themselves and not found it yet.

Some folk may know what they believe and/or practice is something to do with a nature-based, earth based, or native Irish spirituality, or indeed a connection with different Gods and Goddesses, but have no clear definition for their practice, and may be tempted to tick the “No Religion” option, rather than choosing to enter “Pagan” in the “Other” field.

Some may have a well-defined Pagan practice, but feel it is not the Government’s business to know what their spiritual belief is, and again be inclined to tick the “No Religion” box.

We believe that ultimately, it is up to each individual how they approach this.

But we ask you, for your sake and for the sake of your fellow travellers on the path, to enter Pagan on the 2022 census, so that we can continue our quest for widespread recognition and rights here in Ireland.

In 2016, we asked you to do this for the census that year. As a result of this, our recorded numbers rose from 1,883 in the 2011 census to 2,752 in the 2016 census.  This was an actual increase of 40.5% of people defining their religion as Pagan. However, we feel that this does not yet truly reflect the number of actual Pagans in this country.

Therefore we are asking you to please enter Pagan in the ‘Other’ field on the 2022 census.

Be seen! Be counted!